Mr. Castaneda was first elected to the Avra Valley Fire District Governing Board in 2008. He served as Chairman of the Board  from 2010 through 2014 and was recently re-elected to serve in that capacity through 2015. Chairman Castaneda, the eldest of six children born to Louis E. Castaneda and Betty G. Castaneda, was born on January 4th, 1967, in Tucson, Arizona. He attended Marana Elementary School,  Wakefield Junior High and graduated from Pueblo High School in 1986. Mr. Castaneda graduated from Pima Community College in 1988, earning a degree in Business Administration. Chairman Castaneda was elected to the Marana Domestic Water Improvement District Board in 2006 where he served as the Vice-Chairman in 2007 and 2008. Mr. Castaneda has been an active member of the Legislative District 11 Democrats since 2004. He has served as Democratic Party Precinct Committeeman for Precinct 5, and as a Democratic Party State Committeeman.

Ms. Sara Bauer has resided in the Red Rock area for 2 1/2 years. Growing up as a military child, she traveled the world and attended many different schools.  She spent her high school years in Columbia, Missouri, where she graduated from Hickman High School in 1993.  Ms. Bauer also attended Columbia College for two years before leaving Columbia for Arizona. Ms. Bauer has a beautiful 8 year old daughter, who keeps her busy between swim team practice and baseball.  We love being together and staying active.  Ms. Bauer is very proud to be part of such an amazing team!  The positive change and growth that has happened within the fire department is very exciting.  Ms. Bauer feels she brings a great knowledge of public relations and a very expansive knowledge of educational programs for children.  Ms. Bauer really enjoys speaking with community members and being able to speak of the great accomplishments that the district has made. Ms. Bauer has proudly served our community on the Avra Valley Governing Board since her election in 2010.  She is also extremely active in the Red Rock Community Sports program as well as the Red Rock Community Group.  Some people might recognize Ms. Bauer from events that she was in charge of, while holding the PTO presidency at Red Rock Elementary School. Ms. Bauer says, “With all the amazing things happening within Avra Valley Fire District I hope, our community members will take some time to visit our newly designed website to learn a little more about our organizations, programs and services that are provided. ”

Eric Neilson – Clerk of the Board

Eric was raised in Florida, serving in the U.S. Coast Guard from 1979-1983 as an avionics man on C-130’s. He earned a Bachelors Degree in Finance from the University of Central Florida in 1988. Upon graduating from Nova Southeastern University College of Pharmacy in 1995, he moved to Tucson.  Eric has practiced both hospital and community pharmacy at many venues in southern Arizona. On his off time, he raises tortoises and peacocks on a former Titan II missile site. 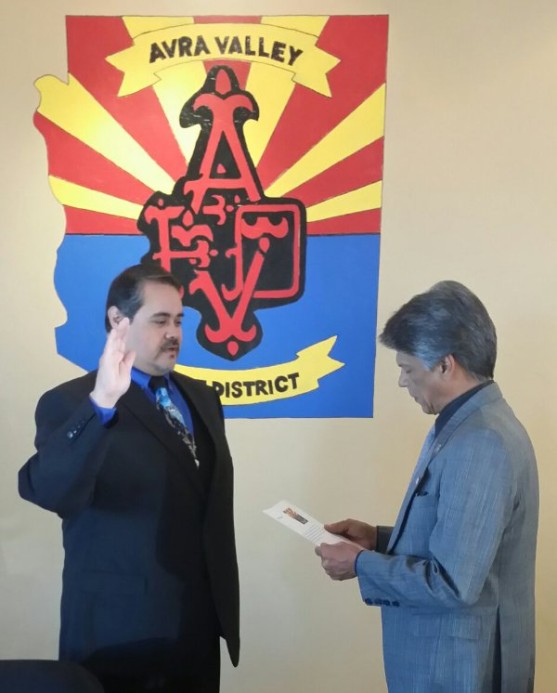 Mr. Armendarez is currently employed by Ventana Medical Systems as engineering support working on cutting edge technology in cancer research.  He owns and operates Old Pueblo Promotions which is a small business focusing on custom graphic arts and promotional products.  Mr. Armendarez is a current member of the Tucson C.E.R.T. team and was formerly a first aid/CPR instructor for the American Red Cross.